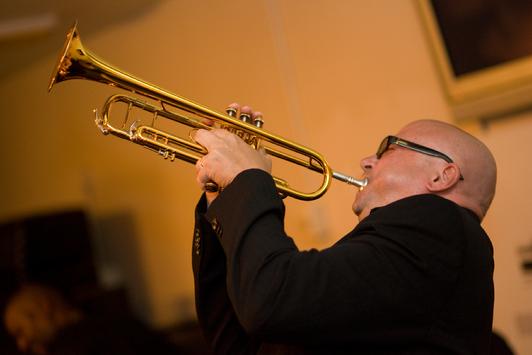 Mark Pender first picked up the trumpet in Kansas City, Missouri. With its rich roots in
jazz and blues, Kansas City has been a great influence on Mark’s style.

He played with the Inner City Orchestra of Kansas City from 1977-79. The orchestra gave Mark a chance to work with noted jazz and soul greats like Jay McShann, Ella Fitzgerald, and Gladys Knight and the Pips. While fronting the band on trumpet and vocals for only a few numbers, the Kansas City Star noted, “the audience clapped and cheered when Mark Pender played a seemingly unendinnames like Diana Ross trumpet solo.”

In 1993, Mark started playing on “Late Night with Conan O’Brien,” and has been in all of the over 1700 tapings. Recent recordings include Bruce Springsteen, the rising, Southside Johnny and the Asbury Jukes , going to Jukesville,The Bogmen, Son Seals, Cissy Houston, Joe Pesci, Ricky Martin, and others. Other credits includes the video from Seville Spain Guitar Legends.

As a band leader, singer and songwriter, Mark has been performing in New York area clubs with an R&B; and jazz laced funk band, The Mark Pender Band. Mark leads the band on vocals and trumpet. The band also features Richie “La Bamba” Rosenberg on trombone and vocals, Glenn Alexander on guitar and vocals and Mo Roberts on drums. Tim Cappello on sax and Paul Frazier on bass.

1993 – Robert Cray (Shame + A Sin)
– Debbie Davies (Picture This)
– Southside Johnny & the Asbury Jukes (All I Want Is Everything: The Best)

1982 – Little Steven & the Disciples of Soul (Men Without Women)