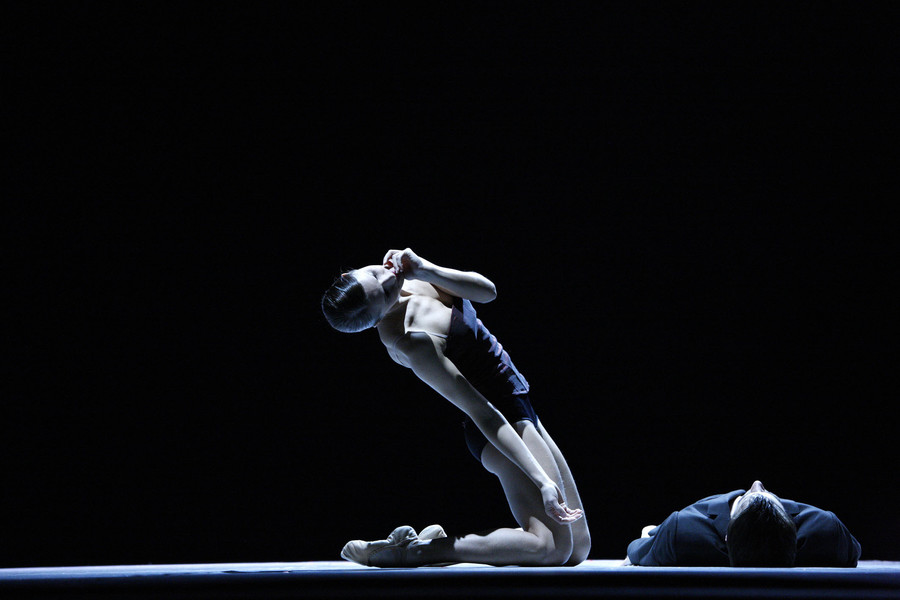 Radio and Juliet proves again that amongst us lives a great choreographer of the modern era, Edward Clug. If he extolled the values of the love of youth and the fortitude of passion in his first choreography Tango; and with his second piece Lacrimas, he expressed his optimism and faith in man; he tackled a period of alienation and explicitly exposed the strength of recurrent impulses, which protrude from within the sensual human tissue in his latest choreography, entitled Radio and Juliet. But even this time, he doesn’t lose his faith in man and the emotional world he inhabits. Clug’s Juliet is a modern vision of Juliet, a woman who recalls memories of her unfulfilled loves, on those six men who could have married her. The choreographer fences the delicacy of love situations with the cold hand of mechanization prominent in the modern world; with piercing rhythms and metal sounds from one of the most successful English alternative rock bands, Radiohead. The band’s music express feelings of desperation, alienation, loneliness; it creates an air of aggression and accelerates the passage of time. The cadence of our time is inexorable, and Clug is following it in creating his latest dance narrative. The tempo, with which the dancers on stage operate are amazing, but unfortunately real and apparent in our time. In this expressive mix of minimalist forms, the arms are the purveyors of Clug’s new explorations into movement and composition, which we can follow back to his solo dance project Kolednica in 2003.

The dance performance Radio and Juliet analyses the life of man and woman from numerous perspectives; it exposes the originality of power, the reflection of co-existence and the labyrinth existing between the buoyancy of two poles, of two separate energies. She is beautiful, lean, independent and free, and wears only a corset; the men are aggressive in showing off of their own powers and are dressed in dark formal suits with bare chests. Although her dance movements and that of the men are equally sharp, equally fast and expressive in the same combinations, the choreographer focuses his attention on the beauty of the female form; on the minimal moves of her soft and delicate arms and hands and dreamy glances, with which she mysteriously entices others. The six men in their seductive frenzy fight and even kill; the woman doesn’t find a partner in the end.

This brilliant interpretation by the members of the Maribor Ballet Ensemble again proves that the young choreographer, who is also an excellent ballet dancer and ballet maestro, Edward Clug formed a compact contemporary dance team in the SNG Maribor. It seems that the six men don’t know the physical limitations of dance – although they are completely harmonious in their movements, each of them expresses his own individuality. Edward Clug expresses with a sheer determination and inner passion; Christian Guerematchi remains expressively sensual and gentle despite his frenzied rhythm; and Sergio Moga represents male power, that of a fighting energy and of domination. With their new solo dancer Bojana Nenadovic Otrin, the Maribor Ballet Ensemble really has gained a lot. Her dance is subtly sensual, expressively strong and embraces the stage set as that of the open wings of a white swan; the dancer is also photogenic and a very good actor.

The story starts as a retrospective on Juliet’s memoirs. At first we see a poetic film on the screen and meet the woman and her melancholies. Radio and Juliet is also a choreographic mix of film shots.

Edward Clug proved to be an accomplished director, a skillful weaver of set design, based on a vivid, yet sensible poem regarding time and love. The set design is planned and honed to the smallest detail; even each individual shot has its own emphasis. The dramaturgy is brilliant and wittingly unites and expresses the multi-layered thought processes involved: the clarity of the story, of its actions and of the dance movements. The scene in front of the altar is unforgettable; also that one, where an association with death dramatically cuts into the space. Also memorable are the last sighs and sentimentality of a dying man, or the mourners with their white gloves… Through the pace of individual scenes, intersected by static movements and darkness; the choreographer uses silence, when he wishes to express the surge of love and the tension between the lovers, who stand still as if “stricken by lightning” in the exchanges between darkness and light. At the end, only Juliet remains on the stage with a lemon in her hand and a sour aftertaste of unfulfilled desires. By her side, her motionless Romeo stands; just shortly before, she was leaning on his arms and he was helplessly clinging to her.

If you want to enjoy a reality and an abstract time amalgam, which is offered through the medium and beauty of dance, if you want to enjoy a vivid poem regarding instincts and love, then I strongly recommend you to go and see the new Edward Clug performance, entitled Radio and Juliet.