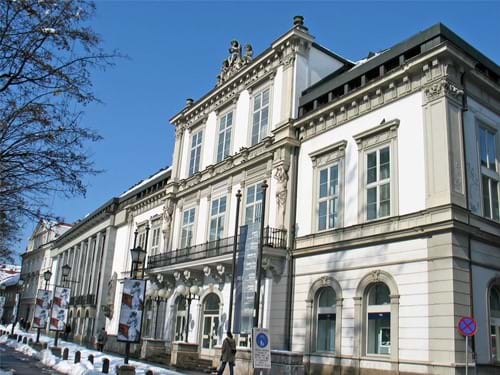 website: www.sng-mb.si
The year 1919 marks the formation of the opera house in Maribor, which happened when the permanent, professional theatre was founded. It was active under the name Slovensko mestno gledališče (Slovene municipal theatre) first and after, from 1921 till 1941 under the name Narodno gledališče Maribor (National theatre Maribor). Already then drama and opera shared all rooms and place in it.

The listening public can hardly imagine the conditions in which the pioneers of the Maribor opera house had to work. The information, that there was no permanent professional opera orchestra and chorus tells enough.

The operettas mark the start of the activity. The first was Mam zelle Nitouche, which prime was on the 1.May 1920. In the opera programme of the next season we can find already nine operettas; Amazons of the emperor’s daughter (Viktor Parma), Beautiful Galatea (Suppe), The ball in the opera (Heuberger), Orpheus in the underworld (Offenbach), The flitter-mouse (Strauss).

The first performance of the first opera In the fountain (V. Blodnjak, conductor-H. Vogrič) was on 4. January 1921.

Five years after Maribor got its first ballet performance Možiček – mere wisp of a man (Ipavec); it’s prime was on 27. April 1949. The first whole evening performance was in 1949, when Coppelia was put on the stage. Maks Kirbos was the choreographer, Heribert Svetel the conductor.

From 1994 has the Opera and ballet SNG Maribor got a new hall with 800 sits and a big stage. Till now we had more than 500 primes and much more repetitions. With guest appearances around Slovenia and abroad (Croatia, Austria, Italy, Luxemburg, Taiwan,…) has the opera Maribor become more opened to the world. The efficient performances of the classical and contemporary Slovene and foreign opera and ballet repertoar make the local and foreign public enthusiastic. The Opera and ballet Maribor is growing to the leading opera-ballet house in our country and one of the vivacious and noticeable in this part of Europe.